Peculiar meteorites are descending upon Teyvat, bringing a rare sleeping  sickness with them. People trapped in deep slumber, mysterious dreams, an  unknown star... The crisis draws closer!
During the event, complete designated quests and "Star of  Destiny" challenges to collect Fading Star's Might and Fading Star's  Essence.

Fading Star's Might and Fading Star's Essence can be exchanged in the  Event Shop for Character Ascension Materials, Hero's Wit, Mystic Enhancement  Ore, Talent Level-Up Materials, Crown of Insight, and other rewards. 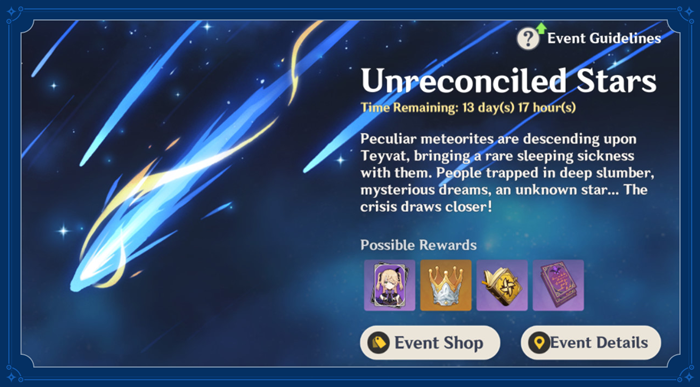 Event Shop duration: 2020/11/16 – 2020/12/06
(Server Time)
Once the event shop closes, all Fading Star's Might and Fading Star's  Essence in your possession will automatically disappear.

Character Boosts
During "Meteorite Remains" and "Fallen Star"  challenges, the following characters will receive a boost: Tartaglia, Mona,  Fischl, Lisa, Beidou, Ningguang, Noelle, Chongyun, and Xiangling.
DMG dealt by these characters will be increased by 60% during the  aforementioned challenges.

Next, let's take a closer look at the gameplay for each of the event's  phases!

Unknown Star - Gameplay Details
Talk to Katheryne from the Adventurers' Guild in Mondstadt to start the  quest "Unknown Star." After Unknown Star is completed, the first  segment of the Unreconciled Stars event will become available: Unknown Star -  Overture.
Select the location icon on the "Unknown Star - Overture" event  page to view the impact sites where meteorite shards are present.

When you reach an affected area, the mini-map in the upper left corner of  the screen will show the approximate locations of meteorite shards. The  meteorite shards will resonate with a nearby character's Vision, causing the  Vision to glow. The closer you draw to a shard, the brighter the glowing will become. 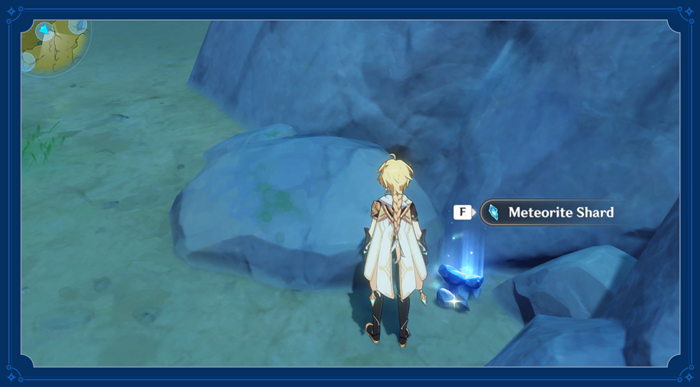 There are different levels to choose from when salvaging meteorite  remains and the available levels will vary according to your World Level.  Salvage difficulty and rewards will vary with the Salvage Level, so please  pick the most suitable difficulty. 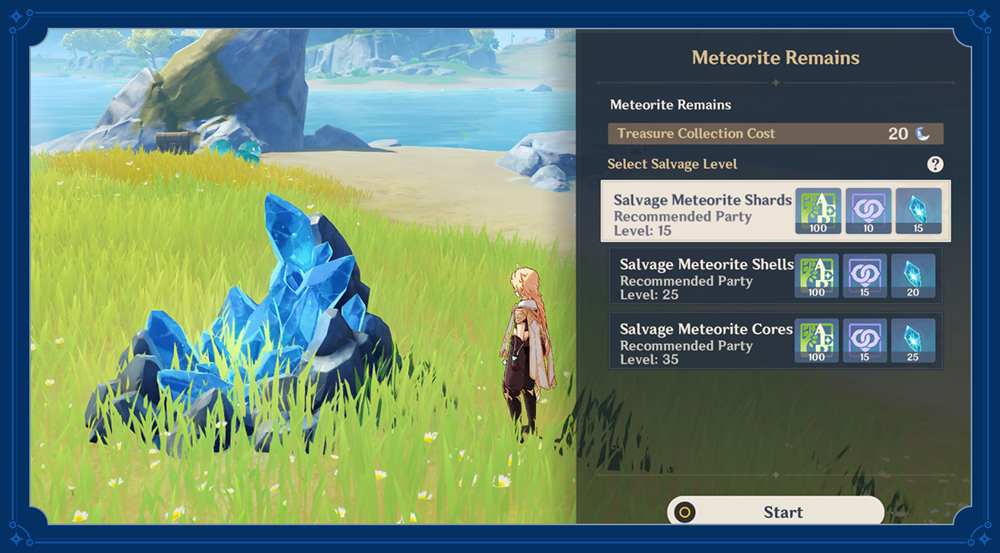 Defeat opponents to advance the Salvage Progress. Reach the max Salvage  Progress within the time limit to successfully salvage the meteorite,  otherwise salvaging will fail.
If you stray too far from the meteorite remains during salvaging, the  meteorite will lose energy, and Salvage Progress will decrease. During  battles to salvage Fading Star's Might, the energy secreted by the meteorite  remains will have an effect on surrounding opponents and cause them to become  more violent and gain elemental protection.

After the salvaging process is completed within the time limit, you may  spend 20 Original Resin to salvage the Meteorite Remains and obtain Fading  Star's Might as well as character Companionship EXP. You may also claim  additional rewards from the event screen after salvaging set amounts of  Meteorite Remains. 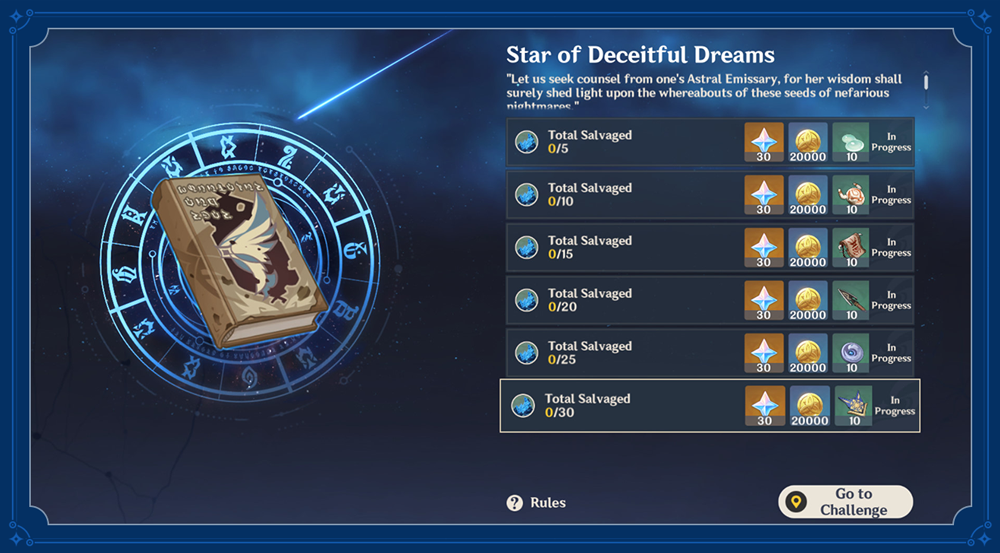 Complete the quest "What the Skies Conceal, the Water Reveals"  to unlock the event's third phase, "Star of Destiny."
After the third event phase has begun, Travelers can challenge  "Fallen Star" to salvage Fading Star's Essence. You may choose to  enter this challenge in either Single Player or Co-Op Mode. 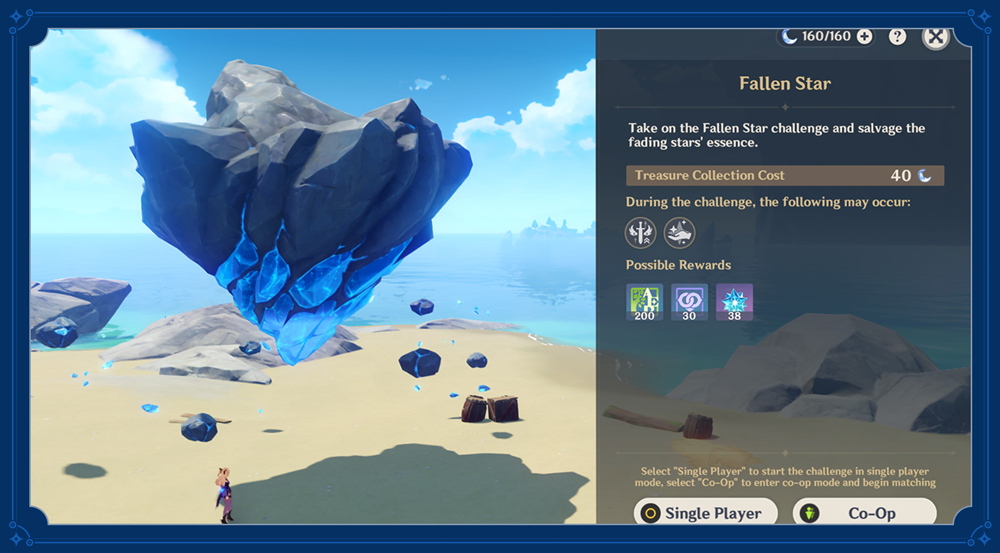 When the challenge begins, one of the following astral anomalies will  occur at random: Orbital Shift, Dark Omen, or Inauspicious Star.
Defeat monsters to accumulate celestial energy. Press the T key or tap  the submit icon within the celestial energy submission zone to submit  accumulated celestial energy. There is a limit to the amount of celestial  energy that can be carried, so be sure to promptly submit your energy. If you  are hit while submitting energy, the submission process is interrupted and  you will lose the energy in your possession (when a certain astral anomaly is  in effect, being interrupted during submission can even cause you to lose all  your energy), so remain vigilant during the submission process.

Deliver celestial energy and fill the progress bar up before time runs out to complete the challenge.

After completing the Fallen Star challenge, you may spend 40 Original  Resin to obtain Fading Star's Essence and other rewards. The corresponding  rewards will vary depending on your World Level. Fading Star's Essence can be  exchanged in the Event Shop for Talent Level-Up Materials and Weapon Enhancement Materials.

That's all the latest details for the Unreconciled Stars event. We'll see  you next time!